During a trainride I wrote about ideas, thought about asking Klaus Becker, if he could open up those tiny beasty milk-packages and pour them into his coffee in front of a camera (look older post) – suddenly some of those came to my view. Immediately I took a photo and as an excuse, why I took this image of the coffee of a stranger I started reporting the scene, where Klaus opened up these packages without splashes – with extreme short arms. I worked against the experimental design, my counterpart would open up his packages as carefull as he could, he didnt splash anything – but pointed out, that he tried to do so as hard as he could. 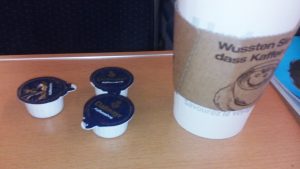 Too bad – I better should have kept my mouth shut. Even Simon, the former stranger, was interested what would have happened wihtout my advice. A conversation started, where he reports of a professor, who teaches with short limbs, writes at the blackboard etc. His subject is process engineering, he teaches at the HAW in Begedorf, which is close to hamburg. Maybe another contact for the BDIOS? than we started chatting about inclusion etc. 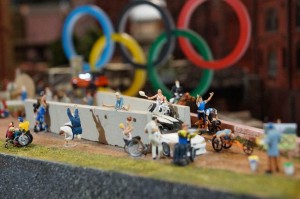